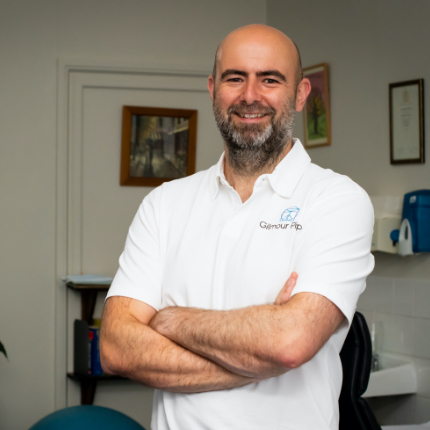 Mark Newman qualified as a Physiotherapist (with honours) from Teesside University in 2000 and was awarded the Beatrice Lamballe prize for best overall student. In 2011, he completed his musculoskeletal masters degree at the University of East Anglia.

Mark’s broad experience includes five years at various NHS sites across East Anglia and then at Ipswich Town Football Club for four years. After working for eight years at Gilmour Piper, Mark became a partner in 2010.

Highly skilled and respected by patients and professionals alike, Mark enjoys treating musculoskeletal problems of the hips, knees, back, neck and shoulder. He listens intently to your problems and works hard to form a therapeutic alliance – and, he’ll refer you to another professional if he thinks they can help you more.

Mark’s developed his ‘hands on’ assessment and treatment skills over the past 20 years, believing that a combination of advice, manual therapy, acupuncture and electrotherapy is most likely to help you. He also makes sure that he remains up to date with the latest research in relevant pain treatments.

When younger, Mark enjoyed playing football, tennis, squash and cycling – more recently, he’s focused on triathlon. This forced him into learning how to swim in 2006 and now he swims regularly with #swimsmoothsuffolk and in open water. He also coaches football at Framlingham Town Youth section to both his children and working out with the PT’s at Gilmour Piper.

Book with
Mark Newman
Next